Since the tragic helicopter accident that took the lives of Kobe Bryant, his daughter, and several others, the world has mourned the loss of a passionate creative, charismatic friend and father, and legendary basketball star.

Kobe Bryant: A Strong Example of a Healthy DI Personality 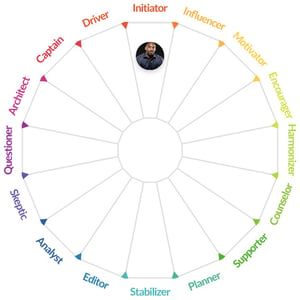 What about Kobe’s personality made him so important to so many people? Beyond being a talented athlete, Kobe had a knack for winning people over. Even when people were rooting for the other team, he managed to earn their praise, not just for his skill, but for who he was all-around.

As naturally confident, Initiator (DI) personality type, Kobe inspired millions of people around the world, all from different walks of life.

Here are a few personality traits Kobe leaned into that likely led him to become one of the most successful and beloved athletes of all time:

"I've played with IVs before, during and after games. I've played with a broken hand, a sprained ankle, a torn shoulder, a fractured tooth, a severed lip, and a knee the size of a softball. I don't miss 15 games because of a toe injury that everybody knows wasn't that serious in the first place."

Like other Initiator personality types, Kobe was fiercely persistent and determined. In basketball, even though he had plenty of natural talent, he dedicated himself to growth, which eventually helped him become one of the most successful, well-known athletes in the world. He was comfortable putting in the work to grow and learn from his mistakes so he could become better in each area of his life. When he messed up, struggled with injury, or faced criticism, he didn’t shy away from the challenge. Instead, he faced it head-on and continued toward his goals.

“A lot of leaders fail because they don't have the bravery to touch that nerve or strike that chord. Throughout my years, I haven't had that fear.”

Like many naturally confident, strong-willed Initiators, Kobe was comfortable openly sharing his opinions and debating with others. He showed this characteristic in most facets of his life. In one interview with a writer for The Washington Post, rather than answering the writer’s questions, Kobe was described as preferring “to debate ideas [he and the writer] each had for fiction stories and how to write a flawed character.” He was comfortable with his opinions and invited others to challenge his ideas as much as he may have challenged theirs.

“You are responsible for how people remember you, or don’t. So don’t take it lightly.”

Kobe was a driven, energetic self-proclaimed “overachiever”. He enjoyed setting his sights on big goals and working to accomplish them. As a kid, he focused his energies on developing his talents in basketball and when he retired from playing professionally, Kobe pursued other out-of-the-box projects: he wrote an autobiography, produced a kids’ podcast called “The Punies,” co-founded a charity with his wife to help young people in need, wrote an Oscar-winning animated short film called “Dear Basketball,” and much more.

Kobe channeled his powerful combination of creative and ambitious energy to succeed in many areas of life﹣he even founded his own multimedia company, Granity Studios, that specializes in telling original stories around sports.

“The most important thing is to try and inspire people so that they can be great in whatever they want to do.”

Kobe’s energizing charisma helped rally people together for a cause, both on the court and off. Kobe thrived in the spotlight and loved being able to connect with people. He dedicated a lot of his free time to mentoring young people through sports, whether they were upcoming NBA stars or just skilled high schoolers who had a passion for basketball. He was comfortable openly sharing advice and challenging others to grow.

This openness became a huge part of how he chose to act as a leader, boldly pursuing his own goals while comfortably pushing those around him, as well. If he thought someone could do better, he told them. In her speech at Kobe’s memorial service, Sabrina Ionescu said, “His vision for others was always bigger than what they imagined for themselves. His vision for me was way bigger than my own.”

When other people felt like they’re dreams were too big, Kobe inspired them to think more boldly and accomplish massive goals.

“I don't want to be the next Michael Jordan, I only want to be Kobe Bryant.”

Perhaps the most important Initiator trait that Kobe possessed is his pride in being his own person. When he started playing basketball professionally, he hated being compared to other athletes. He understood his own potential, valued his personal abilities, and displayed confidence in his uniqueness, no matter what he ventured into. He stepped out of his comfort zone to pursue new passions, like writing and producing, just because he wanted to. Even when people questioned his choices or critiqued his work outside of basketball, Kobe remained confidently independent and comfortably himself.

Though he faced failure, worked toward growth, dealt with criticism, and received praise, Kobe Bryant continued being himself and pushing for greatness, which is ultimately what helped cement him as a true legend and inspiration for millions of people around the world.

The Personality Behind WeWork's Downfall
coaching and leadership | featured

New! The Next Step In Personality Descriptors
coaching and leadership

Meghan, Duchess of Sussex: How Personality Affected Her Relationship with the Press
featured | professional development

How to Talk to Anyone: The Empathy Equation
coaching and leadership