How Personality Will Shape November's Debate

The most powerful job in the world attracts some big personalities, and there’s no shortage of them interviewing in 2020.

There are 17 candidates facing off for the Democratic nomination, and 10 of them will take the debate stage on November 20th in Georgia. While the group is diverse in age, ethnicity and policy proposals, they differ even more wildly in their personalities, which makes the race complex, captivating, and at times confusing for voters.

From the detail-oriented, assertive Elizabeth Warren to the naturally warm, relational Joe Biden, voters may be attracted to certain candidates based on personality traits that they find appealing, even subconsciously. Understanding these personality traits is critical for each candidate as well, because it can help them adjust their communication style as they spar with one another on the debate stage.

I think a lot about this — my company, Crystal, builds software that predicts anyone’s personality. Our AI can analyze text online (e.g. a LinkedIn profile) and accurately identify someone’s behaviors, motivations and communication style. There are 16 core personality types in the model, and each one brings unique strengths and blindspots to the table. Here is a breakdown of where each candidate lands, and they span across the personality map: 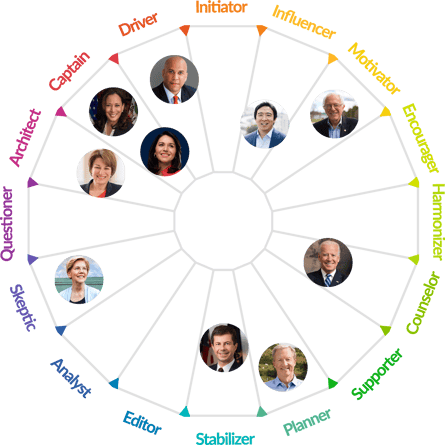 This mix of traits will make for a fascinating debate, but it also opens up vulnerabilities for each candidate. I used Crystal to analyze each candidate’s personality. Here are the big takeaways:

As a Counselor personality type, Vice President Biden’s natural strengths in agreeableness and supportiveness help him to genuinely connect with voters he meets on the road. However, his personality’s natural blindspots include:

These should sound familiar since they are the very traits that have been most negatively received by the press. Other candidates have also attacked him for missteps and gaffes, such as overstating his role in the creation of the Consumer Protection Bureau.

In order to be successful at the next debate, Biden may need to adjust his style to be more like the Analysts, Skeptics and Questioners on the personality map. This means focusing on getting the details right, being logical and laying out the facts objectively, which should lead to more voter confidence that he is prepared and capable to take on such a tremendous responsibility.

Senator Sander’s natural personality, the Motivator, is charismatic and expressive. His approach is punctuated by big, lofty ideas: a Medicare for All plan, $15 federal minimum wage, and free public university proposals. This aligns well with his natural personality style and presenting these ideas with energy and enthusiasm could be particularly useful in providing voters confidence about his age and health.

Sanders may be open to cutting attacks from the more aggressive candidates like Senator’s Harris and Klobuchar. He can also be susceptible to exaggeration, and in a heated debate may allow his arguments to become too emotionally-driven.

Senator Warren’s personality description seems right on point: she is pragmatic and methodical, which has guided her signature campaign plans for each major policy proposal. While a natural strength of her Skeptic personality type is digging into the details, it can sometimes turn into a blind spot in a debate. For example, Warren was frequently attacked by other candidates when she refused to give a direct answer on the costs of her healthcare proposal. She may be well served to lean into the more direct, blunt side of her personality, which is similar to that of Kamala Harris and Amy Klobuchar.

Warren may risk appearing too cold, and, as she was labeled in the last debate, “punitive”. This may be especially true when compared to Vice President Biden and Senator Sanders.

Mayor Pete's personality may bring back fond memories from democrats, because it is similar to President Obama’s. As a Stabilizer type, Buttigieg makes sure to cover the details of his proposals and usually maintains a calm, calculated and steady demeanor when he speaks.

However, playing offense may not come naturally to a personality type like his. In the last debate, he tried to shift outside of his natural personality and more aggressively attack Senator Warren about dodging questions, and Congressman O’Rourke for the lack of detail in his plan for gun-control. This resulted in backlash on Twitter and was no help in his polling numbers.

Mayor Buttigieg may be served best by embracing his naturally methodical, steady style. Voters may particularly appreciate the stark contrast in his personality versus President Trump. At the same time, he risks appearing unable to defend himself successfully, which could signal weakness, so a good balance of the two will likely work best for him.

Senator Harris is a natural debater: direct, assertive and eager to compete. This can be useful as a leader when one needs to use force to make an important point. However, an unintended blindspot of a Captain personality like hers is that she may sometimes come off as cold and blindly argumentative. Her aggressive style has worked in the past, especially at the June debate, when she confronted Joe Biden about his past working with segregationists in the 1970’s.

In the last debate, though, Harris attacked Warren for not supporting her call for Twitter to shut down Trump’s account. This wasn’t very relevant to questions at the actual debate and she wasted much of her speaking time on the subject.

Harris may see the most success by channeling more charisma, warmth, and steadiness to advance her donor-base and court more voters. If she fails to do so, she can appear as harsh and unnecessarily vindictive toward other candidates on the stage.

As an Influencer personality type, Mr. Yang is a visionary with bold ideas. This makes a lot of sense, as his signature policy proposal is Universal Basic Income, known as the “Freedom Dividend”, which involves paying each American citizen a $1,000/month stipend.

While many Influencer personality types are naturally charismatic speakers, Yang is often quieter. At the last debate, he spoke for a total of 8 minutes and 32 seconds, which is drastically low compared to other competitors, like Senator Warren, who spoke for 22 minutes and 47 seconds.

To succeed, Yang may need to match his creative ideas with an equally strong presentation. He may also need to lean into the strengths of Mayor Buttigieg, such as clearly articulating the details that back up his bold visions.

Senator Klobuchar’s personality is intensely practical: direct, efficient and to-the-point. The Architect personality type can make for a highly effective leader, especially when organizing and delegating. However, on the debate stage, these strengths can open her up to a few blindspots. In particular, she’s struggled to make a memorable impression and build personal recognition among voters.

As she touts her plans for fighting climate change and reducing drug and alcohol addictions, she’d be wise to channel some of Senator Sanders’ natural strengths in charisma. If she can get voters excited about her practical, important proposals, she has great potential in the debate.

As a Driver personality type, Senator Booker should thrive on the debate stage: he is naturally persuasive and feels at ease in a fast-paced environment where he needs to think on his feet. However, he has struggled to make a memorable impact.

To succeed in the next debate, he’ll need to lean into his more assertive side, rather than waiting for the right question to be asked. He may be naturally inclined to call out another candidate and inject himself into the conversation, which may be helpful for the success of his candidacy.

Mr. Steyer has the Planner personality type, which makes him naturally warm and inviting to others, respectful and patient. While he is unlikely to offend others on the stage, he also needs to step out of his comfort zone and speak more. He had the lowest amount of speaking time at the last debate: only 7 minutes and 13 seconds. This is likely because he didn’t assert himself enough, so no one had a chance to hear much about who he is or what he believes.

Steyer may find it beneficial to borrow a few pages from the Klobuchar, Booker and Gabbard playbook as more loud, direct personalities. He’ll need to increase his aggression and assertiveness in order to stand out in November.

Congresswoman Gabbard has a similar personality to Senator Harris: they both tend to be strong, direct and competitive, though Gabbard may be slightly more towards the creative, visionary side of the personality map than Harris.

While her Captain personality type’s strengths enable her to argue confidently, she drew criticism after the last debate because she based some of her most impassioned arguments on some inaccurate facts. This was particularly based on her assertion that the U.S. is waging “a regime change war” in Syria.

Unfortunately, it can be difficult for Captain types to admit when they are wrong. This may be an important trait for Gabbard to lean into, otherwise, she risks looking unreliable to voters.

With so many different personalities on the stage, there are bound to be clashes. It would behoove each candidate to carefully consider the strengths and blindspots of their own personality, and those of their competitors, in order to optimize their debate performance.

If you want to see how you compare to any of the Candidates, create a free account and find out!