Are the candidates changing their tone? Some of them are, according to AI.

Last night, the Democratic Presidential candidates faced off in their last debate of 2019, and as a casual viewer, I noticed that this one had a notably different tone than the others.

They were discussing most of the same topics, using a lot of the same talking points and buzzwords that we have heard over the past 6 months. However, some of the candidates seemed more aggressive than usual to me.

Was this true? If so, was it intentional? Are the candidates getting more assertive and confrontational as we get closer to the primaries?

To test my theory, I decided to analyze the full debate transcript with our Personality AI tool (you can try it here) to create profiles for each of the candidates, based on all of their speech in the debate. 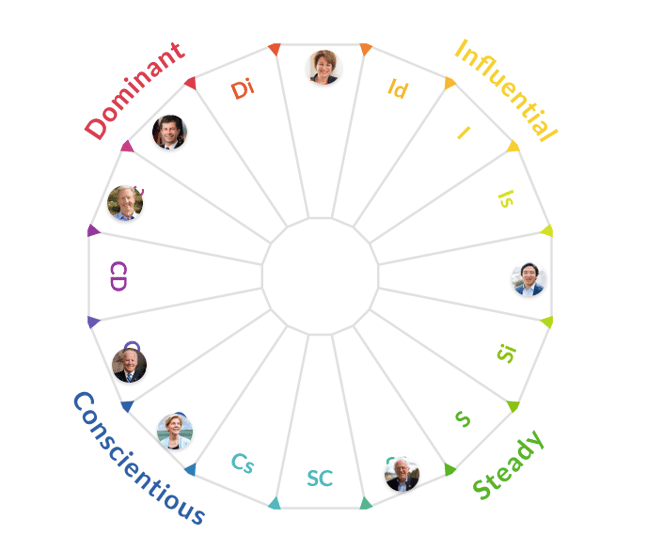 Who changed their tone the most?

Pete Buttigieg was the one who appeared to be the most distinctly combative to me when I watched the debate, and our analysis backed that up. He shifted all the way from his normal Stabilizer (SC) personality to a much more aggressive Captain (D) personality.

Tom Steyer also came out swinging, as he made a similar shift as Mayor Pete from his normal Planner (Sc) personality to become more like an Architect (Dc). He seemed to be much more direct, energetic, and focused in this debate than the past ones.

Joe Biden also took a big turn in this debate. He temporarily dropped his warmer, folksy "Uncle Joe" Counselor (Si) personality and adopted a more critical, logical tone of a Skeptic (Cd) in this debate. This change was very evident when he uncharacteristically interrupted the moderator to make his point with data...

Bernie Sanders also made a major shift from his normal Motivator (I) personality, coming across more like a Planner (Sc) personality type. This result threw me off a little bit, because Bernie is always so animated and expressive with his body language. However, when I re-read the transcript, I realized that he actually did adopt a much more detailed and pragmatic tone in this debate, using more specific and descriptive language over his typical high-level ideas.

Who changed their tone the least?

Elizabeth Warren stayed with her typical Analyst (C) personality, with very analytical arguments and a serious demeanor. This could have been one of the reasons for Joe Biden's shift that I mentioned, as he engaged in more logic-driven conflicts.

Andrew Yang shifted slightly from his normal Influencer (Id) personality to sound more like a Harmonizer (IS) in this debate. He still pitched his classic big, visionary ideas like universal basic income, but also had some more personal and relational appeals than usual. For example, he was able to point out that his son has special needs when asked about the subject, and he also talked about his childhood as a minority facing racial epithets.

Amy Klobuchar was somewhat in the middle of these two groups, changing her tone moderately from Architect (Dc) to come across as more of an Initiator (DI). She seemed a little bit more relaxed than usual and took more risks, particularly in her criticism of Pete Buttigieg's fundraising events.

"I did not come here to listen to this argument. I came here to make a case for progress. And I have never even been to a wine cave. I've been to the wind cave in South Dakota, which I suggest you go to."

My predictions for the next debate

I'm no political analyst, so I can only speak to the tone that these candidates are using, how successful it seemed, and how that might impact their strategies moving forward. A few guesses...

In these debates, we're watching real relationships unfold in real-time. To learn more about how to use AI to understand these personalities and how to apply this data in your own life, check out our book, Predicting Personality.

Leadership Personality Traits: What Are the Traits of a Good Leader?
personality | Workplace

What Are the Best Jobs for Introverts? (20 Good Careers for Shy People)
coaching and leadership

What is DISC Training: Activities for Each Personality & Management Style
coaching and leadership