All Hiring Coaching & Leadership Professional Development Sales
Back to Resources

Solutions to Overcome the 5 Dysfunctions of a Team

With any team, there are inevitable struggles that must be acknowledged and overcome. While team-building exercises and one-on-ones can help foster connectivity, the root causes of failure run far deeper. A high-performance team can only thrive when underlying dysfunctions have been dealt with.

To train an effective team, leaders must become clarity, honesty, and team development facilitators. Certain pitfalls can reduce team success and paint a picture of artificial harmony in the workplace. Understanding these pitfalls, learning to identify them, and takings the steps necessary to overcome them is critical in building a successful and cohesive team.

What are the 5 dysfunctions of a team?

In "The 5 Dysfunctions of a Team", Patrick Leoncini dives deep into why most teams are ineffective and offers solutions to overcome such barriers. According to Leoncini, these are the five most common struggles most teams face:

5 dysfunctions of a team pyramid 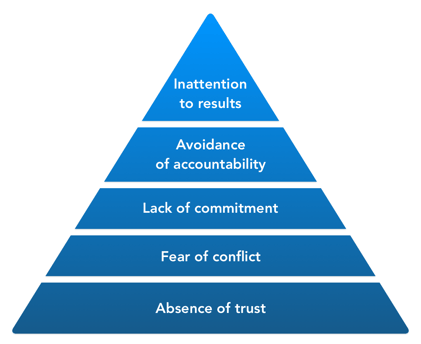 As teams develop and grow, they inevitably must face certain pitfalls along the way. In Patrick Lencioni's best-selling book "The Five Dysfunctions of a Team", he explains the five most predominant team struggles, how to identify them within your team, how to address and solve them, and the fundamental reasoning behind why they exist and lead to failure. Here, we will look closely at the problems they cause and how to get over such issues within a team.

Problems caused by a habitual absence of trust

How to build trust within a team

Making an effort to highlight the strengths of all team members can encourage them to trust one another's abilities and feel more comfortable sharing mistakes or weaknesses. Confidence and trust will follow when team members can appreciate what everyone brings to the table. Having team members take Crystal's personality test can help determine these strengths more easily, with detailed reports to understand the best ways team members can collaborate and use their skills. Ultimately, these tests encourage employees to understand each other better and show vulnerability, thus building trust.

Problems caused by a habitual fear of conflict

When a team does not have trust, they won't be able to participate in productive conflict. In his book, Lencioni says, "teams that trust each other are not afraid to engage in passionate dialogue around issues and decisions that are key to the organization’s success. They do not hesitate to disagree with, challenge, and question one another, all in the spirit of finding the best answers, discovering the truth, and making great decisions.” Basically, conflict is essential for growth and problem-solving--without it, here are some problems to expect:

How to help a team overcome a fear of conflict

While conflict may be uncomfortable, healthy conflict should not be avoided. By exposing team members to stress and discomfort from passionate debate, conflict encourages growth and new ways of thinking and decision-making. Crystal's Teams product provides detailed personality reports on team members, including how to best approach and resolve conflict. This can be a valuable tool in cultivating productive conflict during meetings. If you're unsure whether your team has a fear of conflict, consider making a terrible suggestion at the next team meeting to test whether employees will question it, or encourage employees to discuss and share their thoughts on a previously ignored issue.

Problems caused by a habitual lack of commitment

Lencioni describes commitment as "a group of intelligent, driven individuals buying into a decision precisely when they don’t naturally agree. In other words, it’s the ability to defy a lack of consensus.” A lack of commitment stems directly from fear of conflict; when team members aren’t able to trust each other or engage in productive conflict resolution, they cannot commit. This can lead to a steady decline in overall team performance, amongst other problems:

How to help a team overcome a lack of commitment

To overcome this dysfunction, teams must prioritize clarity. Make an effort to explain priorities, expectations, and goals clearly. It will also help to clarify the why behind any big decisions and be consistent with all messaging. Providing defined expectations and deadlines will help avoid analysis paralysis and help employees commit to the tasks at hand. Leaders should also try to develop shared goals to align the team and facilitate enthusiasm around projects. Finally, encourage learning from mistakes rather than shaming people for them, so they aren't fearful of committing to their duties.

Problems caused by a habitual avoidance of accountability

If a team is struggling from indecision resulting from a lack of commitment and clarity, they will have ambiguous goals and duties--unable to hold one another accountable. According to Leoncini, this dysfunction is "the willingness of team members to call their peers on performance or behaviors that might hurt the team." Although it may be uncomfortable to call each other out for poor performance and actions, it is necessary for productivity and maintaining a high quality of work. Without team accountability, other problems will arise:

How to help a team overcome avoidance of accountability

Similarly to combating lack of commitment, leaders must clarify standards, expectations, and goals to overcome avoidance of accountability. When everyone knows what they need to do in their role and can follow a code of conduct for behavior, they are far more likely to perform. Making these public makes everyone aware of each person’s responsibilities and can make it easier for team members to identify problems and hold each other accountable. Leaders should also reward as a team, not as an individual, and regularly check in with employees regarding their progress to encourage high performance and accountability from everyone.

Problems caused by a habitual inattention to results

Without results, there is no way to measure success in a team effectively. Team members must be results-oriented in their approach; otherwise, they risk company-wide failure to grow and an inability to defeat competitors. When employees prioritize their own individual goals over the collective ones, they'll often become complacent and distracted in their roles, contributing heavily to the other four team dysfunctions. Other problems include:

How to help a team overcome inattention to results

To combat this dysfunction, leaders must eliminate all ambiguity around what success looks like. Clearly defining success and heavily utilizing metrics to actively measure it can help employees visualize their own role and contributions. Leaders must also develop a common goal for team members to work together towards. It can also help break larger goals into smaller, more visible milestones. As leaders celebrate these more minor successes and praise employees for their effort, they'll gain confidence and become more invested in the results.

Our key takeaways on Patrick Lencioni's five dysfunctions of a team

Effective teams take effort and consistency. As a leader, recognizing which of the five dysfunctions of a team are present in your team, understanding their root causes, and learning how to overcome them, is critical for team success. Each of the primary dysfunctions directly relates to and causes the others, so take special care first to prioritize and build trust. Remember that healthy conflict is necessary for productivity and growth. The ideal team player can be found in each employee if they learn how to overcome the pitfalls described by Patrick M. Lencioni, and the leader must enable them to do so.

The first step in overcoming the five dysfunctions of a team is learning about team members' strengths and communicating and resolving conflict effectively.

Beginner’s Guide to the Enneagram
personality